THE ULTERIOR EDEN by j/j hastain

the ulterior eden: a series of genuflections, ruminations and gyroscopes by j/j hastain
(Otoliths, Rockhampton, Australia, 2011)

One of the marks of a great poet, in my non-humble opinion, is the ability to not be constrained by language. Words can never fail the great poet. If existing language is insufficient, then the great poet creates new language. Simple, really. Yet so difficult to pull off in a way that would move deeply a reader.

the ulterior eden is just one of j/j hastain’s works that would make me call hastain a “great poet” in the way I mean it above. It’s not didactic, and yet it’s clear that what is addressed and who is addressing are unconventional:

we intone
rather than recant

we rift as this midwifery
conjugates us

Because it avoids the mistake of didacticism, the work is lyrical, even when—as in this visual poetry excerpt below—uncertainty remains: 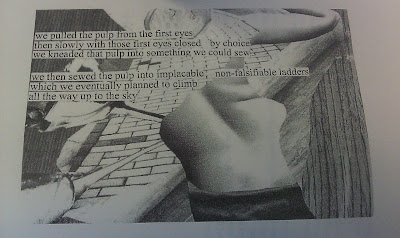 One is not entirely sure what the image is (it suggests rather than presents an image(s)), even as its text is ecstatic:

This energetically-flowing poem (I am moved by the work as book-length poem though the subtitle serves it up as a “series”) relies on eros to engage, and then retain the attention of, the reader. And it’s a deeply intellectual eros that reminds how sexy intelligence can be:

“I vow to always bring you altered time”

I am speculating that j/j hastain, as a self-defined “post-binary genderqueer,” must have directly experienced the limits of convention, including through bodily experiences and with language. From such, hastain alchemizes much Beauty, as can be found in the ulterior eden. And I am cheered to believe that what hastain offers in this particular book is a happy ending (what can I say? I like happy endings!) despite the complicated path to get there, to wit in the last page:

to live having turned
the many necessary disembowelments

Happiness, too, is a choice. And hastain shows that the poetic expanse that does not lose sight of Joy can be where complexity, as it is explored, retains its complexity instead of becomes reduced. Resulting poems can only benefit from their author’s lucidity and vision. In the ulterior eden, for instance, the poet has made the archetypal Song of Songs gorgeously new.

*****
Eileen Tabios does not let her books be reviewed by Galatea Resurrects as she's its editor, but she is pleased to point you elsewhere to reviews of her books. Her newest book SILK EGG: Collected Novels is reviewed by Zvi A. Sesling in Boston Area Poetry Scene; by Michael Leong in Big Other; by Alan Baker in Litter; and by rob mclennan. Stephen Hong Sohn also reviews SILK EGG along with two other books, NOTA BENE EISWEIN and FOOTNOTES TO ALGEBRA: Uncollected Poems 1995-2009 at Asian American Lit Fans.
Posted by EILEEN at 10:48 AM

Another view is offered by Tom Beckett in this issue at: