The cover of Janice Lee’s KĒROTAKIS appears to be a drawing of a cell’s contents on graph paper, magnified to show individual components such as ribosomes and a range of organelles including vacuoles, the Golgi apparatus, mitochondria, and the endoplasmic reticulum. A closer look reveals, however, a number of out-of-place elements. In the top left corner of the front cover—is that a brain? And a donkey’s face that continues across the spine and onto the back cover to reveal the entirety of the ass? And in the bottom left corner of the front cover—the feet of a tiny body in the fetal position? What is this homunculus doing in the nucleus of a cell? 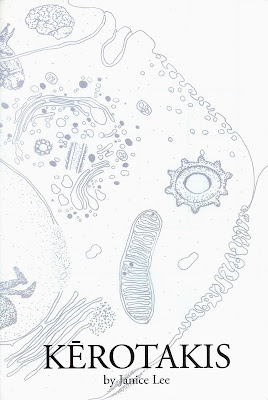 KĒROTAKIS is a curious blend of text and illustrations. The writing might be characterized as prose fiction, as a play script, or as poetry. There is an overarching narrative that gives the book the semblance of a novel. The text begins with a Cast of Characters, though, that lists four characters with brief descriptions in the manner of play scripts, and many of the pages are formatted as monologues or dialogues between the characters. In particular, we follow the coming-to-consciousness story of G.I.L.L., a cyborg creation of Dr. Eynan, along with the time-travel explorations of Dr. Eynan’s brain. The following page offers a sense of the voices in the book: 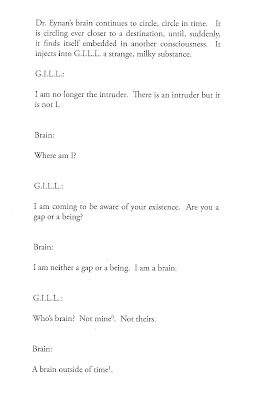 The third-person perspective narrative voice explains what is happening, but we also have the first-person voices of the characters in conversation.

On other pages, Lee places text in deliberate and careful ways, suggesting the importance of lines and spacing as in some poetry. 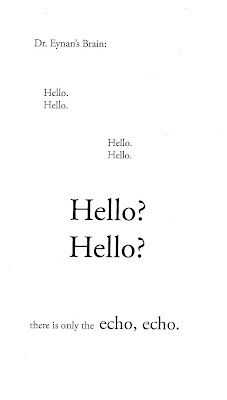 It’s worth noting that Lee is a designer, and some of the blurbs for the book explain that Lee brings her design perspective to bear on the creation of this narrative.

Playscripts, poetry, and visual design. Already, this book is an amalgamation of many things. The subjects of the narrative and of the characters’ musings, too, span a diverse and sometimes contradictory range of ideas: alchemy, science, futurism, art, philosophy, cyborgs, technology, religion, and mythology.

In this book, identity—in the sense of one’s self as well as in the sense of the boundaries of a sense—is messy. Dr. Eynan creates a process to detach his brain from the rest of his body and to send it into other times to collect data about humanity. The brain takes on a life of its own. Nothing is straightforwardly what it is or seems to be.

Realms of knowledge and knowing clash and intersect. The cybernetic Frankenstein-monster G.I.L.L. sees her reflection in the mythological Golem. The kerotakis, an alchemical apparatus invented by Maria the Jewess to capture vapors of heated substances in hermetically-sealed containers, mirrors a painter’s palette in the art of transmutation and creation. Zosimosa, described in the cast of characters list as “a Painter, an Author, a Mother out of time,” contrasts with Dr. Eynan, a male scientist whose perception of reality is both profound and absurdly blind (he forgets that he has sent his brain out into the world). 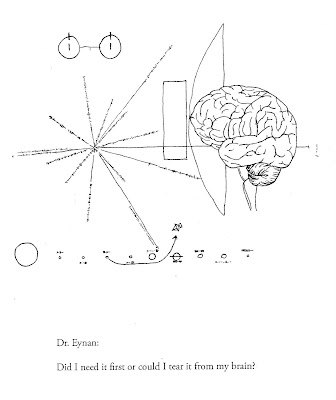 Footnote numbers throughout the text alternate between 0s and 1s. The simplicity of digital code lurks at the edges of the text. 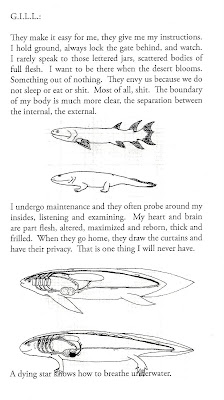 Janice Lee’s KĒROTAKIS is ultimately a puzzling narrative structured by both words and images. A central impulse in the book is to bring together many disparate elements to see where they spark in conflict and where they resonate. The crucifixion of G.I.L.L., a religious narrative, overlays and contests the man-made creation of G.I.L.L., a narrative tied to science, technology, and a rejection of the metaphysical realm.

Paul Lai named his dog Giles after the librarian Watcher on Buffy the Vampire Slayer. He reviews books occasionally at Asian American Literature Fans and edits short fiction for Kartika Review. By day, he copy edits for a living; by night, he attends classes for his master’s in library and information science degree.
Posted by EILEEN at 9:15 PM