I've looked carefully at visual art for umpteen years. One of the things I take away from that experience is the deceptive power of small scale works. At times, when I looked at a small painting and felt it to be a powerful one, I knew that it could be hung on a gigantic wall and it wouldn't be overpowered by said wall's expanse. It holds up the wall, as the saying goes.

On the other hand, of course, if a tiny painting wasn't effective, it would hang just like a smudge against such a gigantic backdrop.

I thought of the immensity of power possible from a small scale when I read through Teeny Tiny Issue #13, a zine made from a single piece of paper folded up to present six poems. Here's an image of it against my palm to give you an idea of its physical scale: 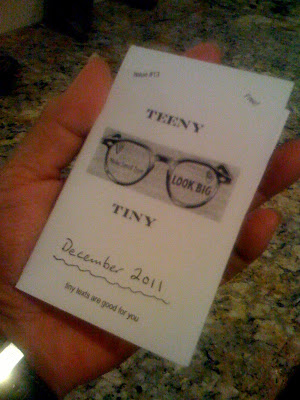 Yet the sum of these "small" poems -- by Laura-Marie Taylor, Eric Dickey, Heather Nagami, Amanda Laughtland, Mimi Allin and Sandra Simonds -- is a hugely enchanting presence. When you read each poem, they transport you to bigger worlds of the imagination such that you forget (and deem irrelevant) how they were presented first to you on a small fold of paper. For Taylor's and Dickey's contributions, their poems' impact is enhanced by ending lines that don't conclude so much as encourage the reader to continue the "story" on their own. Here are their endings:

The time I exposed
my left breast accidentally.
--from "stupid things I've done" by Laura-Marie Taylor

He was sleeping late and was easily agitated in the morning. Something had a hold on him.
--from "In the Clutch of the Octopus"

The endings aren't "open-ended" in the sense that the term is used for other poems that invite multiple interpretations/reactions. There actually are straight-forward narratives that led to these endings: in both, the narratives can be gleaned from their titles, and Taylor's is actually a list-poem. But they end beautifully by inviting other preoccupations for those readers so inclined to, ahem, occupy the poems.

I enjoyed all the poems but have to say I adored the last poem by Sandra Simonds which I replicate below:

Everyone loves the sea
because the sea loves no one.
She pulls in everything: the nursery, the moon,
the glass of milk
the moonlight shines through on tge kitchen counter.

If I had to compare the sea to something
I'd compare her
to the sea.

It's such a fitting way to end a tiny but powerful zine. Succinct, a hint of a growl lurking within the tender references, and finally wisdom. What a huge punch from such a ... deceptively tiny thing holding up the world.

Eileen Tabios does not let her books be reviewed by Galatea Resurrects as she's its editor, but she is pleased to point you elsewhere to reviews of her books. Her newest book SILK EGG: Collected Novels is reviewed by Zvi A. Sesling in Boston Area Poetry Scene; by Michael Leong in Big Other; by Alan Baker in Litter; and by rob mclennan. Stephen Hong Sohn also reviews SILK EGG along with two other books, NOTA BENE EISWEIN and FOOTNOTES TO ALGEBRA: Uncollected Poems 1995-2009 at Asian American Lit Fans.
Posted by EILEEN at 9:45 PM